When you wake up Tuesday morning, it’ll be as warm as it’ll get all day.

By 7 a.m., it’ll be 43 degrees in Atlanta, and that temperature will slowly creep down to below freezing before the day is over, Channel 2 Action News meteorologist Brad Nitz said.

It won’t feel like that temperature outside, though — it’ll feel even colder.

“Temperatures will actually be falling throughout (Tuesday) afternoon,” Nitz said. “As we get through noon, the wind chill will be in the 20s and it gets even colder from there.”

Below average temperatures are in the forecast beginning tonight and into tomorrow. Don’t be caught unprepared! #gawx 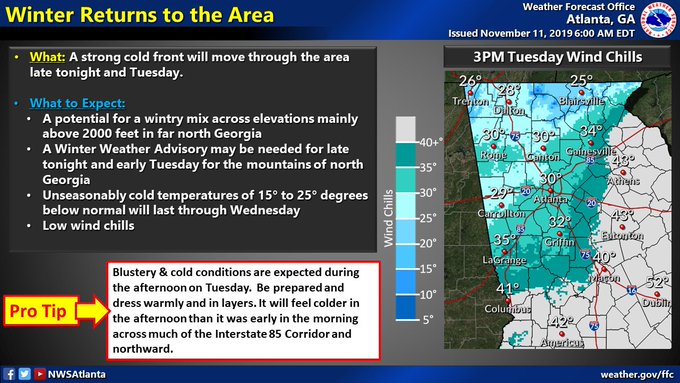 29 people are talking about this

So why is this happening less than two weeks into November?

A cold front is set to move through Georgia overnight, bringing a wave of rain followed by a stream of frigid air, Nitz said. As a result, temperatures across North Georgia will drop significantly over the next few days, leaving Monday’s high of 67 degrees as a faint memory.

Atlanta isn’t at the risk of seeing any wintry precipitation from the storm, despite the chilly weather and a 100 percent chance of rain Tuesday. However, the North Georgia mountains and some spots in northwest Georgia could see a dusting of snow in areas of at least 2,000 feet.

This is the system that’s coming our way. It’ll bring rain followed by a hard freeze as arctic air heads our way.

Parts of the of far north Georgia could see a wintry mix early Tuesday.

I’m breaking down the timing and locations on Channel 2. 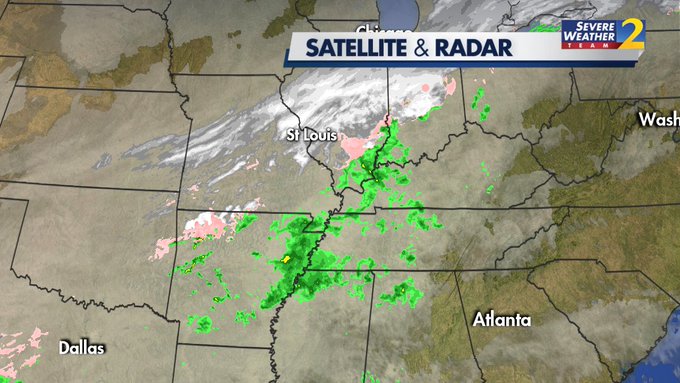 “Overnight and into the morning hours, the arctic front settles in … and we’re expecting this cold air to catch up with the back edge of the rain with just enough of an overlap to get a little bit of light wintry mix in parts of north and northwest Georgia at 5 a.m.,” Nitz said.

The National Weather Service has issued a freeze watch and wind advisory for all of metro Atlanta and most of North Georgia through Wednesday morning. However, Nitz said only the 16 northernmost counties are at risk of seeing any wintry mix or light snowfall.

Any wintry weather will dissipate by 9 a.m., he added.

Wind gusts could reach 30 to 35 mph Tuesday, meaning the wind chill is expected to be below freezing as early as noon. It could feel as cold as 20 degrees in Atlanta and the mid-teens in far North Georgia.

“My advice for tonight: Find that winter weather gear, because we’re going to need it for the next few days,” Channel 2 meteorologist Brian Monahan said. “The coldest air of the season is on the way.”

He said it is typical for the day before a big pattern shift to be nice, and that’s exactly what North Georgia got Monday. After a start in the 30s and 40s for Veterans Day remembrances, afternoon highs reached seasonal norms in the mid-60s.

Morning lows in the 20s are in the forecast for both Wednesday and Thursday before returning to the 40s on Friday, according to Channel 2.