ATLANTA – Gov. Brian Kemp, during a press conference on Thursday afternoon, said the state has reached a new milestone in the fight against the coronavirus, and that Georgia has again expanded testing.

The governor and members of the state’s coronavirus task force held a press briefing that began at 4:30 p.m. Thursday in the North Wing of the Georgia State Capitol building in Atlanta.

Kemp announced that the number of positive tests for COVID-19 continues to decline.

“We reached another milestone this week…we have less than a thousand COVID patients hospitalized in our state,” Kemp said. “‘I’m proud of what we’ve accomplished over the last several weeks, but we cannot rest on our laurels.”

There are 919 current hospitalizations, which is a 38 percent drop since the start of the month. He also said more equipment is on the way to help fight the virus.

The governor continued to urge Georgians to use the Augusta University Express Care app to finding testing sites.

Toomey said the integrity of Georgia’s coronavirus data is an absolute top priority. They are working to be as transparent as possible with the data, improve the data proved to them, and to decrease the time it takes to report it. 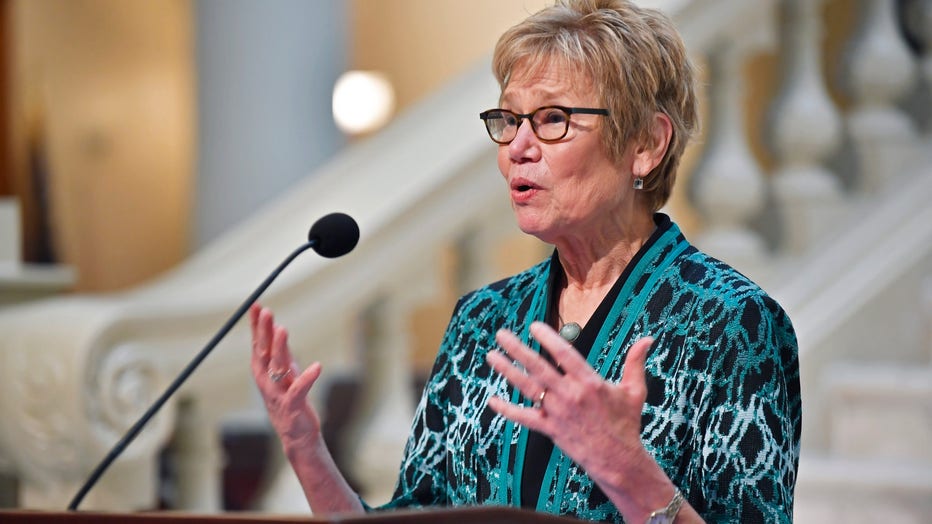 The governor also urged Georgians to continue to following social distancing and other safety guidelines, even during the Memorial Day holiday weekend.

In addition to updating the current situation on the coronavirus in Georgia, Gov. Kemp also urged all Georgians to complete the Census. The Georgia Emergency Management Agency urged all Georgian to keep track of the tropics as the 2020 Atlantic Hurricane Season begins next month. Already, one named storm has already formed. Tropical Storm Arthur skirted well off the coast of Georgia last week, but didn’t cause much impact.

Some businesses across Georgia have already begun the reopening process. Gyms, fitness centers, bowling alleys, restaurants, hair salons, and other businesses have reopened in part, but are restricted in operation and must follow social distancing guidelines.

Bars, nightclubs, and amusement parks remain closed at least through the end of May.

Kemp previously stated that the reopening “would not be business-as-usual” and would require companies to implement changes to ensure sanitation mandates and social distancing.

“I think this is the right approach at the right time,” Kemp said. “It’s not just throwing the keys back to the owners of the businesses.”

The state’s shelter in place order expired at 11:59 pm. April 30. Gov. Kemp announced he was extending the public health emergency to June 12, 2020.

Georgia has had more than 39,000 confirmed cases of COVID-19, the disease caused by the virus, according to data from the state Department of Public Health. At least 1,687 people have died.

The Centers for Disease Control and Prevention released a new six page document outlining its recommendations for opening up the country, including schools and businesses.

The Georgia Department of Public Health apologized for its most recent coronavirus data gaffe, explaining a “processing error” over the weekend had incorrectly shown a downward trend in the number of daily new infections.

The apology came after the controversy over a bar chart posted on the state health department website that appeared to show new confirmed cases in the counties with the most infections had dropped every single day for the past two weeks.

In actuality, there had been no clear downward trend.

For most people, the coronavirus causes mild or moderate symptoms that clear up within weeks. But for others, especially older adults and people with existing health problems, the highly contagious virus can cause severe symptoms and be fatal.

President Trump told governors on a conference call Monday that he “will step in” if the federal government disagrees with state reopening plans, as he largely expressed satisfaction with how the governors are moving to lift coronavirus restrictions in their individual states, according to a report.

Trump, whose administration last month revealed guidelines for when states should begin lifting stay-at-home orders and other social distancing measures meant to slow the spread of the virus, has vocally pushed for the rapid reopening of the economy. The president said in an interview with Fox Business’ Maria Bartiromo last week that his critics want the economy to remain shuttered until the November election, calling Democrats’ reluctance to lift the coronavirus measures “a political thing.”

“The governors are making their decisions, and want to make their decisions, and that’s the way I want it to, and we will step in if we see something going wrong, or if we disagree, and some people say that’s nice, and some people say I shouldn’t be doing that, but we’re going to do it if we see something wrong,” Trump said to the governors Monday, according to audio of the call obtained by CBS.

Send us a message and we might play it on the radio.

Click "Allow" in the permission dialog. It usually appears under the address bar in the upper left side of the window. We respect your privacy.

Are you sure you want to start a new recording? Your current recording will be deleted.