Returning to Capitol Hill from a Thanksgiving break, House Democrats are showing no signs of backing away from their efforts to impeach President Donald Trump, with plans this week to release a new report on the Ukraine investigation and hold the first hearing in the House Judiciary Committee, a process which could ultimately lead to a historic vote before Christmas to impeach President Trump.

After wrapping up five public days of impeachment hearings in November, House Democrats spent the last ten days releasing more testimony about the Ukraine investigation, and writing a report on the findings.

Here is some of what we learned over the Thanksgiving break, and some of what to expect in the days and weeks ahead:

1. Democrats to forge ahead on impeachment. Since the end of public impeachment hearings, Democrats on the House Intelligence Committee have been writing a report to summarize the findings from the panel’s Ukraine investigation.  That report – based on information from a series of closed door depositions and public impeachment hearings on President Trump’s actions regarding Ukraine – is expected to be voted on by the Intelligence panel in a Tuesday evening meeting. On Wednesday, the focus shifts to the House Judiciary Committee, which will hold its first impeachment hearing with a group of constitutional scholars. In other words, Democrats are not wondering what they should do on impeachment.

NEWS: The House Intelligence committee will vote on its impeachment inquiry report on Tuesday, Dec. 3 at 6PM ET. The report then heads to the Judiciary Committee, which is holding its first public hearing on Wednesday at 10AM ET https://docs.house.gov/Committee/Calendar/ByEvent.aspx?EventID=110294 …

868 people are talking about this

2. Will Trump legal team join in impeachment hearings? As House Democrats signaled last week that they were ready to push ahead with impeachment efforts, they also gave the White House until this Friday to decide whether to join the proceedings. In letter, House Judiciary Committee Chairman Rep. Jerry Nadler (D-NY) set the December 6 deadline for an answer. “I remind you that participation by the President or his counsel has been described by the Committee in past inquiries as ‘not a right but a privilege or a courtesy which is being extended to the President’s counsel,'” Nadler wrote in an earlier letter to the White House. Republicans have complained about the inability of the President’s lawyers to be involved in the process.

3. Two White House budget officials quit over Ukraine aid delay. In a deposition released to the public just before Thanksgiving, there were some new nuggets from the impeachment testimony of career OMB official Mark Sandy. Sandy – who was the only OMB employee not to defy a subpoena for testimony – confirmed that he knew of two different White House budget staffers who had quit their jobs over the delay in Ukraine military aid. This wasn’t a policy dispute. It was partly over concern that the White House was breaking the law by not spending money approved by the Congress for Ukraine. It’s very interesting to note that in a city which is renowned for leaks to the press, the news of these Ukraine-related resignations at the White House never became public, until now.

4. Testimony reveals more pieces to Ukraine puzzle. The Sandy testimony also brought out more evidence of how important July 25, 2019 has become in the Ukraine investigation. That morning, President Trump spoke by phone with the leader of Ukraine, and asked the President of Ukraine to announce investigations into the Bidens and the debunked conspiracy theory about Ukraine interfering in the 2016 U.S. elections. We also now know from the impeachment testimony that a few hours after that phone call, Ukraine government officials were already sending emails to counterparts at the Pentagon and State Department, worried the Trump Administration was delaying military aid for Ukraine. And Sandy confirmed in his testimony that on the evening of July 25, the White House officially put the aid money on hold, two weeks after basically deciding that would be the decision. “Things seem to keep coming back to July 25th,” said Rep. Val Demings (D-FL).

88 people are talking about this

5. Have you read any impeachment transcripts? Here is a link to all 17 of the impeachment deposition transcripts released by the House Intelligence Committee. There are three tweets in this thread with all of the links. Don’t tell anyone you didn’t have a chance to read some of the evidence for yourself.

6. Republicans still want to hear from the whistleblower. In the five days of public hearings before the House Intelligence Committee, GOP lawmakers repeatedly demanded to hear from the person who first raised red flags through the chain of command about the delay in Ukraine aid. So far, Democrats have stiff-armed those Republican requests. But don’t look for the GOP to be silent about the matter in coming weeks.

The “whistleblower” should testify. Dems say no, claiming his role was only to pull a fire alarm. The problem is (1) he seems to have pulled it w/bad intentions (2) it looks like Schiff’s team told him to pull it (3) he never saw a fire. We want to know who told him there was one

6,225 people are talking about this

7. Republicans also want testimony by Rep. Schiff. GOP lawmakers also are likely to keep up a steady drumbeat of jabs at Rep. Adam Schiff (D-CA), the Chairman of the House Intelligence Committee. While Republicans charge that Schiff met with the unidentified whistleblower, and that he knows the identify of that person, Schiff has publicly denied that. For GOP lawmakers and the President, Schiff has become their impeachment pinata – and one would expect that to continue as this effort from Democrats continues in the House.

It’s easy to hide behind a gavel. Adam Schiff needs to testify in Judiciary, answering questions from Democrats, Republicans, and the White House—just like Ken Starr did.

This is crucial since Schiff has refused to share evidence that all House Members should be able to see. 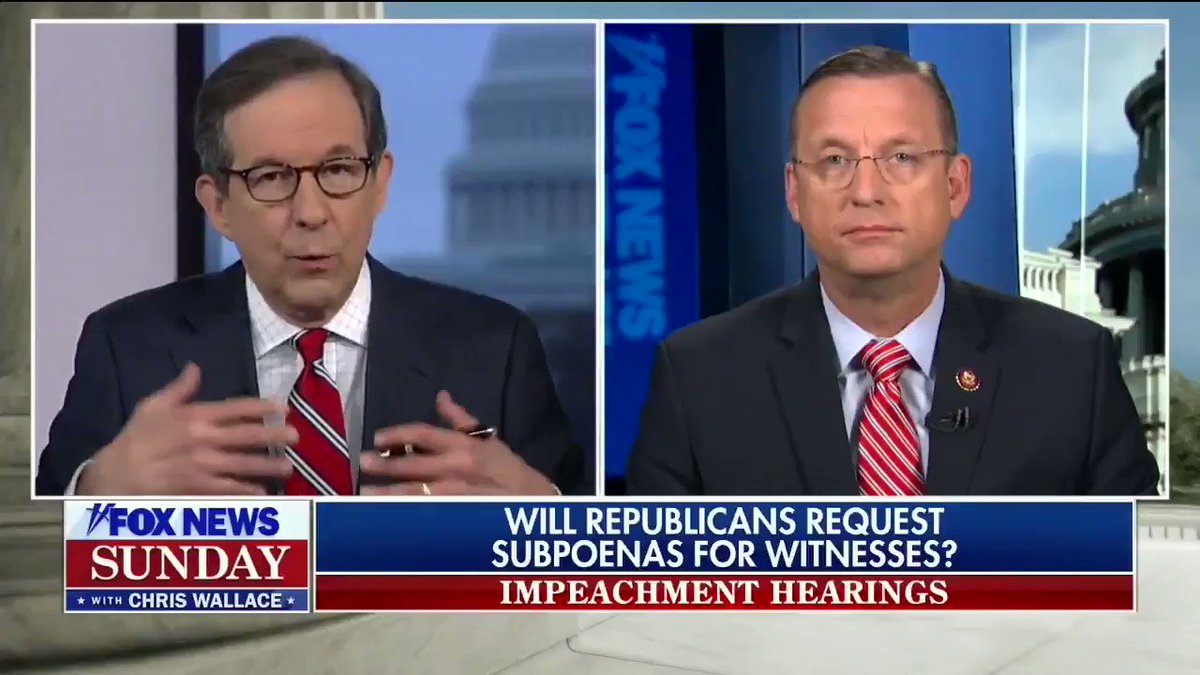 2,949 people are talking about this

8. Trump echoes GOP broadsides on impeachment. Over the Thanksgiving break President Trump joined Republicans in Congress in continuing to belittle the impeachment investigation from Democrats in Congress. “Schiff’s impeachment hearings wasting time when Congress must do real work,” the President tweeted.  “Trump did nothing impeachable,” he added in another post. “Sen. Tim Scott Says Trump ‘Innocent,’ ‘No Way’ Senate Convicts,” was another Twitter missive from Mr. Trump. And as the impeachment proceedings continue, one should not expect the President to be silent.

I will be representing our Country in London at NATO, while the Democrats are holding the most ridiculous Impeachment hearings in history. Read the Transcripts, NOTHING was done or said wrong! The Radical Left is undercutting our Country. Hearings scheduled on same dates as NATO!

38.2K people are talking about this

9. The impeachment schedule was similar 21 years ago. Rewind to December of 1998. The story I wrote on this day said, “The White House and Democrats are demanding that GOP leaders bring impeachment proceedings to a quick finish.” That sort of sounds familiar. Back then, it was Republicans pursuing a historic impeachment vote against President Bill Clinton. The partisan battle resumed after a Thanksgiving break, and raged until the Saturday before Christmas, when the House approved two articles of impeachment against Mr. Clinton. Given the calendar, an impeachment vote in 2019 against President Trump – by the Saturday before Christmas – would be a possibility this time as well.